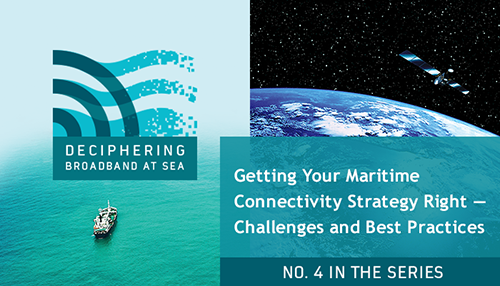 In 2011, access to the Internet was deemed a human right in a United Nations report.

In the commercial maritime industry, offshore communications is also a critical part of the picture – not just for operations, safety, and competitive advantage, but for crew morale, too. According to the 2006 Maritime Labour Convention (MLC), also called the “Seafarers’ Bill of Rights,” onboard crew should be granted “reasonable” access to Internet facilities, where available.

Between 2000-2015, global Internet penetration grew 7-fold, from 6.5% to 43%, according to a 2015 report issued by the International Telegraph Union, the United Nations specialized agency for information and communication technologies (ICTs).

In India and the Philippines, two countries that supply many crew members in the international commercial shipping industry, Internet access has accelerated. According to the Internet and Mobile Association of India (IAMAI), India will have 500 million Internet users by 2017. A recent Global Web Index report states that the Philippines has the fastest growing Internet population in the world, experiencing 531% growth in the last five years.

On land, this rise in connectivity can be attributed to technological progress, infrastructure deployment, and falling prices. Behind it all is demand, the same demand that humans take with them to sea. Offshore, while barriers to Internet access exist, they are decreasing, thanks to developments in maritime VSAT that have enabled small, affordable onboard terminals to deliver fast, affordable data and voice service to ships.

Specifically, the launch of mini-VSAT Broadband by KVH Industries in 2007 – considered a breakthrough in maritime satellite technology and service – has helped pave the way. Today, KVH’s maritime VSAT service is the market leader, enabling reliable and affordable onboard operational applications as well as those key to crew retention and welfare.

Access to Communications – A Growing Consideration for Officers and Crew

Seagoing job satisfaction and Internet access are intrinsically and inescapably linked. According to the Futurenautics Crew Connectivity 2015 Survey, when seafarers were asked whether communications onboard influenced their employment decisions, 73% of respondents answered in the affirmative.

Also, Futurenautics asked seafarers whether there had been an improvement in communications since MLC 2006. While a small majority felt there was improvement, the single largest group (39%) believed it had not improved, with another 3% stating that it had actually worsened.

On the upside, 60 percent of crew onboard ships that do provide them with Internet connectivity use it daily, according to Futurenautics. The arsenal of onboard electronics crew take with them to sea includes smartphones, laptops, and external hard disks, according to a Futurenautics’ new Maritime Satellite Communications & Applications 2016.

The needs and wellbeing of the “digital native” crew, how they relate to the commercial shipping industry, and best practices for creating an effective maritime connectivity strategy are explored in the series “Deciphering Broadband at Sea,” published by KVH as an aid to smarter decision-making about global maritime satellite communication, especially in the two most recent articles, “Connectivity – A Critical Element in Seafarer Recruitment and Retention,” and “Getting Your Maritime Connectivity Strategy Right – Challenges and Best Practices.”

We’re pretty excited here at KVH headquarters because the very first shipment of TracPhone V3 systems left the building on their way to boaters yesterday afternoon! The […]

At KVH Industries, satellite antennas must survive the ride – or else. As a leading innovator in satellite Internet, voice, and television services for in-motion […]

Improving your SATCOM experience at sea with Adaptive Coding and Modulation