As small observation and inspection class remotely operated vehicles (ROVs) become more and more capable, they have been able to take on a wider range of tasks, including inspection with HD video and sonar, object search and recovery, and ultrasonic testing. They can go places larger ROVs can’t and can even perform essential tasks previously only possible via larger, expensive ROVs. 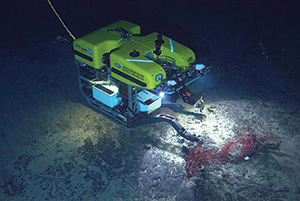 But one handicap of working with small ROVs, whether unmanned or autonomous, has been lack of accuracy navigating in the global navigation satellite system (GNSS)-denied environment of the ocean. Accurate three-dimensional navigation is essential for precise work such as station keeping, target tracking, and infrastructure maintenance. Large work-class ROVs have the advantage of having enough on-board power to support accurate and expensive north-seeking gyro navigation systems. The weight, price, and power requirements of such systems make them unworkable for observation class ROVs typically used for such jobs as scientific and environmental research, as well as infrastructure inspection.

Fortunately, there are navigation alternatives for smaller ROVs that makes them capable of precise navigation and control without significantly increasing their cost or power requirements.

The challenge of navigation with small ROVs

Working in the subsea environment, ROVs can’t use GNSS signals for navigation while in operation, due to the electromagnetic opacity of water. To compensate for the loss of GNSS, observation class ROVs are generally equipped with one or more acoustic navigation systems, which assist in a dead-reckoning position calculation from the last available surface GPS/GNSS waypoint.

Ultrashort baseline (USBL), Doppler velocity log (DVL), and long baseline survey (LBL) systems are among the sensors used to provide navigation information to ROVs. Currents, refraction, noise, and reverberation are some of the effects that interfere with accurate acoustic location.

USBL sensors calculate the position of an ROV by measuring its range and bearing from a transceiver on the launching vessel. DVLs have come down in size and price, and are now more common on smaller ROVs than they were even a few years ago. DVLs use multiple transceivers to measure velocity against the sea floor or columns of water, and use that data to correct and calculate absolute location. LBL requires the placement of sea floor transponders, and is usually confined to specific work areas.

Each sensor system has limitations, including dropped signals, rate drops, and simple errors. The more capable versions, particularly DVLs, can be expensive.

The challenge is to get more accuracy and utility out of existing onboard undersea navigation systems without significant additional cost.

The response to the challenge of accurate navigation on a budget is a relatively inexpensive inertial navigation system (INS) that can work with one or more of the other navigation sensors to provide significantly improved accuracy without greatly increasing weight or power requirements. This fusion of sensor systems works by providing data from a variety of sensors so that each can serve as backup to the others, covering the blind spots that occur.

Inertial navigation via an inertial measurement unit (IMU) serves as the heart of the system, measuring orientation and acceleration, and thus providing a baseline value for position relative to starting point. But an inertial navigation system on its own is subject to drift. DVL can provide velocity data, and USBL and LBL systems position data. The result is extremely high resolution position and velocity determination, using existing sensors, at a reasonable cost. Sensor fusion also reduces the effects of inevitable sensor errors by resolving them with other data sources.

To learn about sensor fusion implementation using KVH’s 1750 IMU as the core processor of an integrated sensor navigation and control solution be sure to attend our free webinar:

IoT: The Future of Seafarer Safety

Faced with the COVID-19 crisis, shipping companies have one business imperative: maintaining business continuity. IoT, implemented in a plug-and-play manner, can be instrumental in ensuring […]

Day of the Seafarer – Thank You, Mariners

June 25, 2013 Jill Connors Company, Featured Comments Off on Day of the Seafarer – Thank You, Mariners

Today is Day of the Seafarer, a tribute celebrated on June 25 every year as a way to recognize the world’s 1.2 million seafarers, who […]

Telemedicine and High Speed SATCOM: A Vital Link for Saving Lives of Seafarers

As fulfilling and compelling as a life at sea can be, it also carries with it dangers – whether your ship is your workplace or […]