Where would you rather work? Thousands of miles offshore, cut off from the outside world, or in a climate-controlled office, with 24/7 access to your family and friends via social media with your smart phone?

Given those career options, Generation Z – those born after 1995 – say they’ll take the office, thank you, and onboard maritime jobs are the big losers. 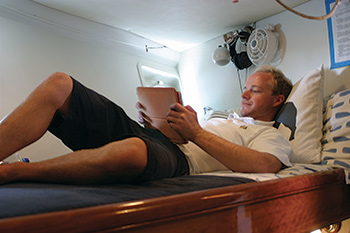 According to a recent story in The Telegraph, Britain is struggling to recruit young people into its merchant navy, Royal Navy, and fishing fleets, and will face a huge shortfall of seafarers. An aging demographic, a dearth of awareness of maritime jobs, and a lack of onboard connectivity are to blame.

Moreover, 73% of the report respondents said that the level of crew communications services provided onboard did influence their decisions about which shipping company they worked for. “Without Internet access, life is too hard,” states one respondent to the Crewtoo Seafarers Happiness Index conducted by Crewtoo, an online network of more than 110,000 members of the seafaring community that is managed by KVH Media Group.

Fleets with a successful maritime satellite communications strategy provide not just a means to connect with home, but also deliver what people on shore consider normal, everyday interactions – watching the latest television programs, sports events and breaking news, or movies; listening to music; keeping on top of finances; and, staying abreast of global events. The broadband satellite communications and multi-casting technologies available today enable seafarers to conduct themselves at sea much closer to the way they and the rest of the world do on shore.

For more on this topic, you may be interested in reading “Satellite Communications and Seafarers: Overcoming the Disconnection Effect,” and Connectivity – A Critical Element in Seafarer Recruitment and Retention,” articles in the Deciphering Broadband at Sea series published by KVH as an aid to smarter decision-making around global satellite communications.

About Chris Watson 73 Articles
Chris is the senior director of marketing for KVH Industries. A lifelong sailor and storyteller, he's a self-professed geek who finds all of this technical stuff fascinating.

IoT: The Future of Seafarer Safety

Faced with the COVID-19 crisis, shipping companies have one business imperative: maintaining business continuity. IoT, implemented in a plug-and-play manner, can be instrumental in ensuring […]

With cell phone plans and SATCOM service, customers need to be aware of their data consumption based on budget, selected plans, and provider policies, among […]

Team KVH hits the road and the tarmac for good causes

October 25, 2010 Jill Connors Company Comments Off on Team KVH hits the road and the tarmac for good causes

Recently, KVH employees, family, and friends got out into the community to help raise awareness and funds for some significant health issues while having a good time […]