The tale of the spoofing of the White Rose of Drachs is an interesting case study in how the GPS/GNSS system actually works, and how these systems can be tricked with false data. The article published in IEEE Spectrum was written by Todd E. Humphreys of the University of Texas in Austin, and Mark L. Psiaki of Cornell University. In it, they explain the protocols in place to protect the two types of coded signals sent by the U.S. GPS constellation, civilian and encrypted military, and what it takes to fool a GPS receiver. Working different sides of the spoofing aisle, Humphreys is the spoofer who created a system for fooling GPS receivers, and Psiaki is the anti-spoof defender. Their chronicle of the lies that GPS can be made to tell is enlightening in lots of ways. 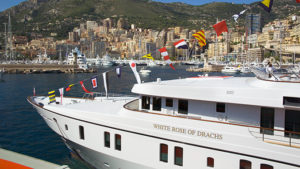 GPS spoofing is a real and present threat to navigation as the story of the White Rose of Drachs proves. But to keep things in proper perspective, spoofing of this level is beyond the abilities of most hackers. The White Rose was the willing subject of an intentional GPS spoof experiment, but even so, providing false but convincing GPS signals to the superyacht was not easy.

For satellite-based navigation to be successfully spoofed, the hacker has to:

Although the spoofer device used on the White Rose is too sophisticated for the “average” hacker to assemble, according to both Psiaki and Humphreys, the necessary technology is available in many countries. There are rumors of North Korea attempting GPS spoofing, and private individuals as well.

In addition to laying out the three major ways that GPS spoofing can be detected, another important point is made in this tale of spoofs, lies, and GPS. That is the need to build awareness of the vulnerability of many of our electronic systems to faked physical signals.  As more unmanned and autonomous systems are planned and rolled out for testing in various communities, we must consider the question of the vulnerability of the sensors helping these systems to navigate safely and reliably.

One of the ways makers of unmanned and autonomous systems are working to mitigate such vulnerability is sensor fusion – the integration of multiple sources of positioning, control and navigation data within a single navigation system. Most autonomous and unmanned navigation systems use at least three sensors; these might include but are not limited to LiDAR, radar, Doppler Velocity radar, side scan sonar, cameras, GPS and inertial systems. The multiple sensors provide accurate, reliable and robust data, which makes the navigation system much harder to fool with fake GPS signals alone.

Discover why Position, Navigation, and Timing are at risk. Download the new ebook, Meeting the Growing Threat of GPS/GNSS Disruption, today.

How Loud is that Doggy in the Window?

January 25, 2016 Chris Watson FOG/Inertial Nav, Military Comments Off on How Loud is that Doggy in the Window?

When it comes to defining success in robotic design, the focus is often on how well the robot moves and reacts to changing topography and […]

Shipping and Safety in Review

November 15, 2018 Steven Jones Commercial Maritime Comments Off on Shipping and Safety in Review

Earlier this summer, Allianz Insurance issued its valuable report on key developments in maritime safety along with an analysis of shipping loss during the past […]

Stay in the Zone of Satellite Communications Connectivity

Did it ever occur to you that satellite communications signals can’t penetrate masts or other metal structures? It’s worth thinking about in the context of […]