There’s no question that installing satellite communications and television equipment on a boat takes skill, experience, and knowledge – characteristics in abundance among members of the National Marine Electronics Association (NMEA), the organization that for more than 50 years has set the technical standards for marine electronics.

So when NMEA presents its technology awards at its national convention every year, the industry tends to sit up and take notice. KVH sure did! 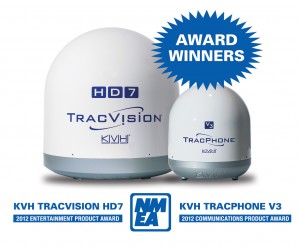 For the 14th year in a row, KVH received NMEA’s coveted “Product Award” – this time,  in two categories:  “Entertainment” went to TracVision HD7, and “Communications” to TracPhone V3.

“It’s always gratifying to win the recognition of our industry partners,” said Martin Kits van Heyningen, KVH President and CEO. “There are no better judges for the real performance of marine electronics products than the knowledgeable NMEA dealers who are actually out there installing and supporting the equipment on a daily basis.”

TracVision HD7 is a stabilized satellite antenna that simultaneously tracks and delivers transmissions from both Ku-band and Ka-band satellites delivering an HDTV experience exactly like viewers enjoy at home. NMEA recognized a KVH innovation in particular: HD7’s “Tri-Americas LNB,” which enables the antenna to work with all of the popular services throughout the Western Hemisphere.

TracPhone V3, the world’s smallest maritime VSAT antenna, is designed to work with KVH’s mini-VSAT Broadband satellite network, the world’s leading maritime VSAT service. With its small size and low-cost hardware and airtime, it is a game-changing communications product for the leisure market that allows owners to actually use the service rather than just have it for emergencies and backup, which is the norm with traditional L-band products.

NMEA is the global marine electronics industry’s premier trade association and is made up of more than 600 companies including manufacturers, dealers, and boatbuilders.

With the crucial role that broadband connectivity now plays on commercial vessels, the need to carefully choose the right SATCOM solution has never been greater. […]

September 7, 2017 Chris Watson Commercial Maritime Comments Off on 4 Simple Questions to Get the Right SATCOM Solution for your Fleet

Greater automation and remote control, as well as the incorporation of the onboard Internet of Things, are driving increased demand for a SATCOM solution that […]

Other Voices: Helping Firefighters Make a Difference for Kids

It’s always great to hear from a happy customer. It means that we’re doing our jobs well. However, it’s always especially gratifying when we […]