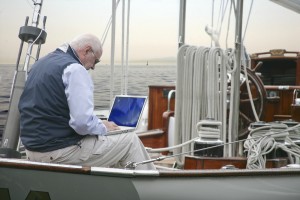 The advent of the digital nomad and extreme telecommuter is reaching the sea: The KVH team at the Miami International Boat Show last month saw signs that people are viewing broadband connectivity as the ticket to spending more time on their boats.

“I had some fascinating conversations with customers who said they were finding that having broadband connectivity was allowing them to sneak away more,” said Jim Dodez, KVH’s Vice-President of Marketing. “It’s actually becoming an extension of telecommuting.”

At Miami and other venues in recent months, Dodez has spoken with people from a number of different professions who mentioned that extended telecommuting is becoming more feasible, including:

It’s an extension of a more connected population in general: A February 2012 report found that 80% of American adults consider themselves part of the Internet population.

“As the demand for Internet service has grown on land, so has the interest in having it on a boat,” said Ryan Smith, KVH’s National Sales Manager for Leisure Products. “Boats are an extension of a person’s home, and home office. They want Internet onboard.”

“Data is definitely the big thing,” said Jim George, KVH’s Director of Sales, Mobile Broadband Group, based on conversations he had with consumers at the show. “People have evolved from not understanding satellite communications at all to not only understanding it, but realizing they want it.”

“I heard it over and over again: If I want to spend more time on my boat, I have to be connected,” said George. 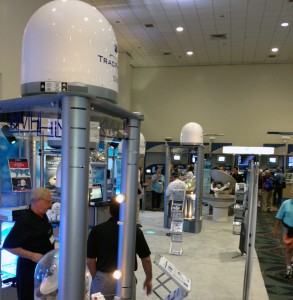 At the show, owners of boats in the 50- to 90-foot range were particularly interested in looking for broadband connectivity. For that consumer, KVH’s TracPhone V3, V7, and V11 antennas, as well as KVH’s mini-VSAT Broadband service, can turn a boat into a floating office anywhere on the planet. Plus, the mini-VSAT Broadband service provides faster data speeds at 1/10th the cost of Inmarsat.

Last word: “Broadband at sea is allowing people for the first time to realize the dream of spending more time on their boats by staying connected. They can travel the world and still get their job done,” said Dodez.

Also, KVH’s Jim Dodez was happy, as always, to run into Ben Ellison at the show, and delighted that Ben’s website, won the BWI award for original online content.

We’re pretty excited here at KVH headquarters because the very first shipment of TracPhone V3 systems left the building on their way to boaters yesterday afternoon! The […]

TracVision HD11 makes its U.S. debut! The 2011 Fort Lauderdale International Boat Show is living up to its reputation as the world’s premiere marine […]